Portland is My Kind of Town

Had a little weekend get away with Jesse, technically for his birthday, but I was the one who really wanted to get out of town. And if I'm not going to Bellingham I'm usually going to Portland. So Portland it was.

We stayed at The Grand Lodge, a McMenamins place in Forest Grove, OR. In case you were wondering this is NOT that close to Portland... especially if there is a detour. After some turnabouts in long fields of corn we made our way safely to the hotel. It is a really fun place to stay, with lots of paintings like this: 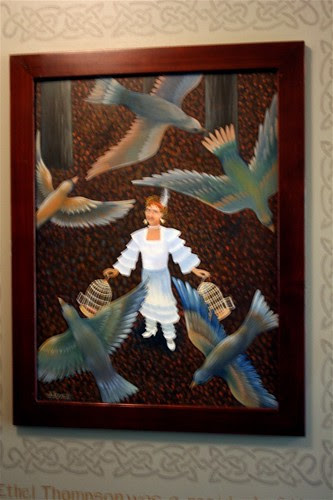 (but less blurry) to commemorate the people who have contributed to the history of the area or the Lodge itself. There are also large metallic slides, leftover from when it was a retirement home for Masons. Apparently they were for evacuation in case of fire, but they don't look that safe to me! I even heard from a friend that her husband broke his tailbone on one!

The best thing about the Lodge is the disc golf course. According to the Lodge site: "The object of the game is to complete each hole on the course in the fewest number of throws and land your disc in an elevated metal basket commonly referred to as a disc catcher." For me, the goal was not to get my disc too muddy and to stay somewhat near the baskets. Jesse takes this pretty seriously, I think this was how I got him to agree to this trip in the first place.

He takes it pretty seriously. First the wind up. 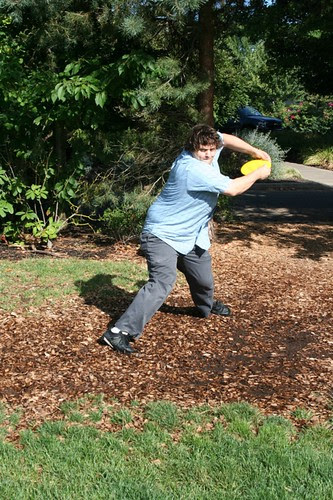 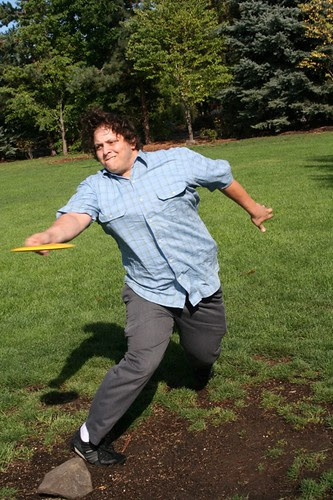 Whereas I am more of a Sunday in the park type thrower. 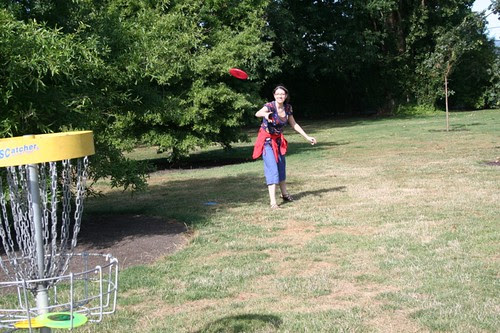 As close as I am to the basket, that disc is not going in. Well it was my first game.

The first place we ate in town was also my favorite. It's the Little Red Bike Cafe on N Lombard. They serve delicious sandwiches and coffee. 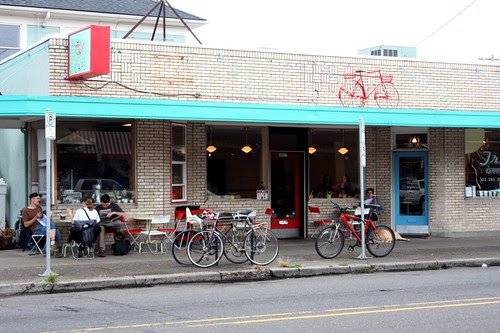 I also opted for the Buttermilk Berry Shake. Definitely worth seeking out! 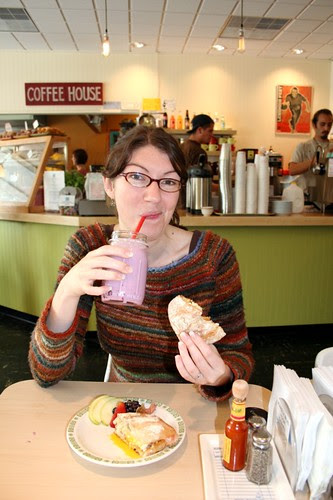 There are definitely yarn stores in Portland. We visited a few, but there are many more.

We visited Twisted PDX on NE Broadway. They have one-page reproductions of all of Elizabeth Zimmerman’s original newsletters for $1 each! I snatched up several including the hand to hand aran pullover. They also had several of her and Lucy Neatbys dvds. Some Japanese knitting books. Many beautiful shop samples, but I didn't take any pictures at this stop! Bad blogger.

However I did buy this pattern too, perhaps for next spring?

We also went to Knittn' Kitten on NE Glisan, it's a thrift, craft store! Can you believe it? Two of my favorite things combined. They had a variety of sewing notions, buttons, snaps, etc. Lots of vintage fabric for only a couple of dollars a yard. I am just starting my sewing obsession, so I'm trying to take it slow. I bought a few yards of fabric, but don't have pictures quite yet. Some vintage knitting books. For when I have kids and want to dress them like old people. :) With the names I'll give them it'll all work out. They had yarn, but shockingly enough I didn't buy any yarn on this trip. No one can believe it.


We went to The Dig thrift store, where Jesse bought a few clothes but I didn't find anything. The prices were great I just didn't see as much in my size. Definitely worth a look especially if you're in the neighborhood.

We went to the Mill End Store which is just fabulous. I was a bit overwhelmed. Their Simplicity patterns were 99 cents! They had tons of fabric in a warehouse, with a very nice staff. Their oilcloth was the cheapest I've seen. Jesse triumphantly helped me pick out this fig pattern. 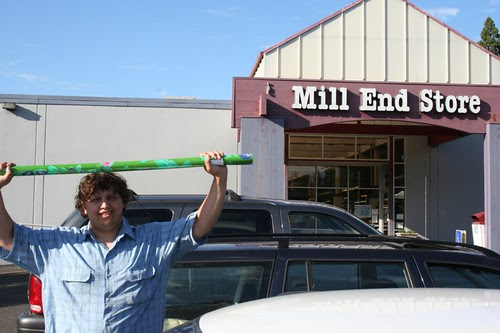 All in all a great trip. I'll have more pictures of the spoils I returned with soon!

We'll need to make a trip together there sometime! I've always wanted to go :) Especially now that I've seen that Little Red Bike Cafe. I think that was my bike outside! Looks like you had a splendid time!
Stephanie

What will you use that snazzy oil cloth for? Or were you just so impressed with the price that you couldn't resist?

The boys affectionately call this the Christmas Palace. We stayed in the Wedding Suite this past Christmas with my Dad. And yes, it is in the middle of nowhere, but fun all the same. ;)

We did have a splendid time. I really enjoy Portland and we can go there by train!

This is a Flickr badge showing items in a set called Scandinavia 2010. Make your own badge here.